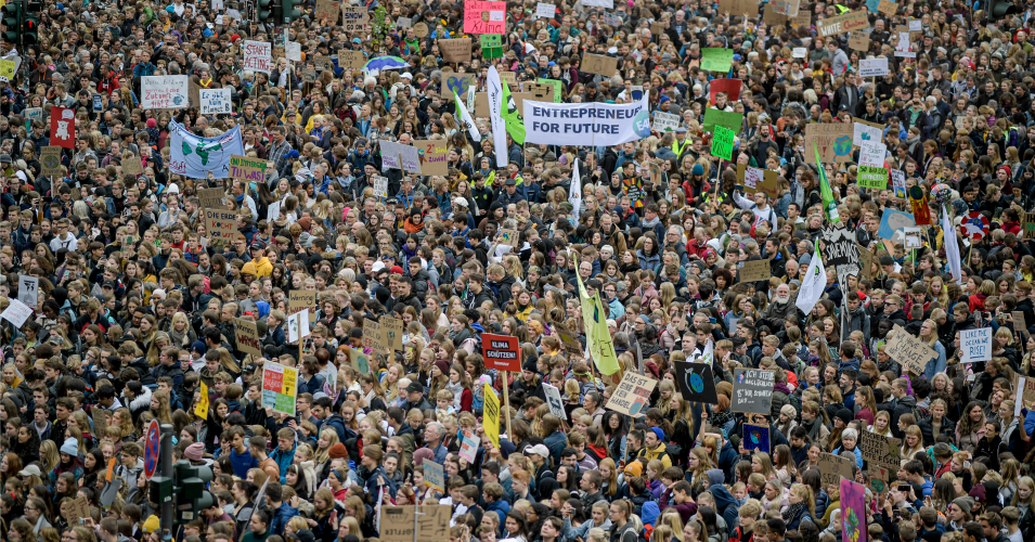 Thousands of demonstrators gather at the Jungfernstieg in Hamburg.
September 30, 2019
Kicking off what organizers say was the largest mass climate demonstration in history, millions of young people and their adult allies flooded the streets around the world Friday, September 20th, to take part in the Global Climate Strike and pressure world leaders to confront the ecological crisis with bold and urgent action.

According to 350.org, over 4 million people took part in the collective demonstrations worldwide.

"Today we saw a movement, made up of people from all ages and backgrounds coming together and calling for the end of coal, oil, and gas. No matter what differences we have, we are together now because we are fighting for our future," said May Boeve, executive director of 350.org, in a statement.  "September 20th was a demonstration of intent, of four million people who took time off from work or school to say that they are ready. Ready to move on and make the changes we need for a future free from fossil fuels and based in climate equity and justice. And it was only the beginning."

An estimated 400,000 people gathered in Australia alone as hundreds of thousands of others rallied across India, Germany, Austria, Indonesia, Kenya, Pakistan, the U.K., and other nations.

Demonstrations took place in over 130 nations on Friday, with more than 800 strikes planned in the United States. "I think it's pretty clear this will be the biggest day of climate action in planetary history," said 350.org founder Bill McKibben on Friday as images and videos began to pour in on social media.

Vic Barrett, a 20-year-old plaintiff in the Juliana v. United States climate lawsuit against the American government, wrote in an op-ed for The Guardian that he is taking part in the Global Climate Strike because "this decade is our last chance to stop the destruction of our people and our planet."