“I just wanted to remind them [the police] that we are here with peaceful purposes and without weapons, but they are not” 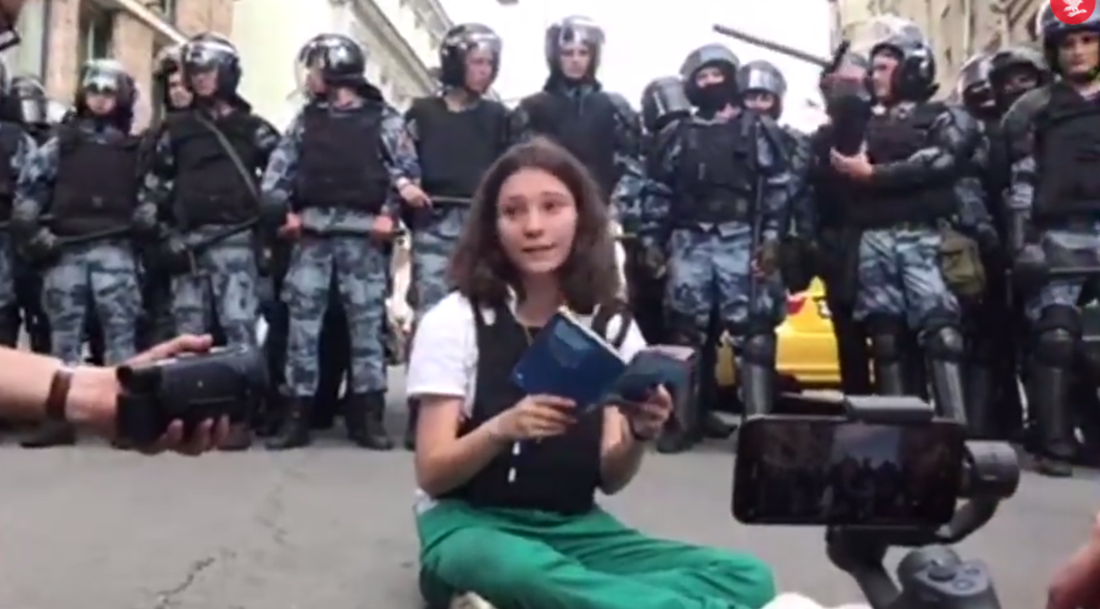 She is a lone teenage girl sat cross-legged and armed with nothing more than the Russian constitution.
They are a line of Moscow’s notoriously brutal riot police, equipped with shields, batons and helmets.

But the image of a young pro-democracy demonstrator single-handedly defying Vladimir Putin’s security forces looks set to become one of the most powerful symbols of resistance to the president’s autocracy.

Olga Misik, 17, was photographed sitting in front of the officers reading out the country’s constitution – which affirms the right to peaceful gatherings – during protests on Saturday.Apparently unsure how to handle such a show of calm audacity, the police hold back.

The image has gone viral across the world, being shared thousands of times, the peaceful defiance central to the photo faintly reminiscent of that present in the the iconic picture of Tiananmen Square’s Tank Man. It is now being used by Russian opposition to rally support in the face of continuing state oppression.

“I just wanted to remind them [the police] that we are here with peaceful purposes and without weapons, but they are not,” the high school graduate told the Riga-based Meduza website.

“It never even occurred to me that someone other than them would hear it … I sat on the ground and began to read out our constitutional rights, specifying that what is happening here [police arresting protestors] is illegal.”

The weekend’s demonstrations were ostensibly a protest against the banning of several leading opposition politicians from running in September’s Moscow City Duma elections. But they also called more widely for greater political freedoms and transparency in Russia, where elections are widely viewed to be rigged.

“Injustice always concerns everyone,” Olga said. “Today the Moscow City Duma, tomorrow the governor of the region, a week later the head of the Resurrection District. It is only a matter of time.

“It is foolish to think that this is a rally only for free elections or the admission of candidates. This is a rally in defence of elementary constitutional rights that would not be questioned in a democratic state.”

The teenager herself, whose own father is a supporter of Mr Putin, was allowed to walk away after the reading, but was later arrested by police as she walked to a subway station.

“They did not introduce themselves, did not explain the reason and grounds for detention,” she said.

“There was not a rally or a crowd of people in this place. They grabbed my arms and legs and dragged me down the street and through the underpass … I screamed that they were hurting me, but they told me that they knew better.”

She was held until the next day and says she will now appear in court next month charged with attending a public event which was held without filing a notice.

Olga was one of more than 1,000 people arrested.